What are the main causes of epistaxis?

Commonly referred to as “nosebleeds,” epistaxis results in nasal hemorrhage occurring in the mucous membranes lining the nasal cavity. The pathology of epistaxis is most often not serious. However, recurrent and persistent bleeding can hide a more serious condition.

There are two types of epistaxis:

The origin of intranasal bleeding?

Epistaxis is often caused by damage to the vascular network, and in particular the kiesselbach plexus, located in the anterior part of the nasal cavity. 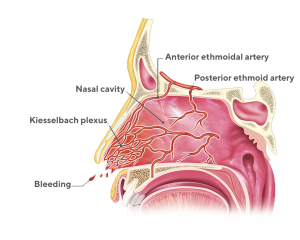 There are several factors that can cause epistaxis to occur. Most often, these bleeds can be impressive but are not dangerous for patients.

The most common causes of epistaxis.

1. Epistaxis related to inflammation of the mucosa

The nasal mucosa is very fragile, lining the cavities of the nose irrigated by a highly developed network of blood vessels. Damage to those vessels can cause inflammation and then epistaxis.

This inflammation can occur in children as well as in adults, but also in people suffering from allergic rhinitis or even a simple cold. The latter can indeed lead to congestion of blood vessels in the nasal cavity and cause bleeding.

Located in the anterior part of the nasal cavity, the Kiesselbach complex can bleed very easily following nose-picking. Children are the most affected.

Other factors can increase the sensitivity of the blood vessels or capillaries in the nasal cavity and explain this bleeding:

These different factors can take on a greater magnitude in fragile populations such as children or elderlies.

Certain traumas of accidental or iatrogenic origin can trigger epistaxis:

Certain environmental factors can increase the risk of epistaxis, such as cold weather, change in altitude or dry air. Having very heated rooms in the winter or a dry climate will promote bleeding.

In rarer cases, epistaxis is a serious condition that may be triggered by a genetic disease, such as Rendu-Osler disease, or an anatomic condition such as a deviated septum.

Cardiovascular diseases may require the use of anticoagulants or antiaggregants, which can lead to coagulation disorders and thus promote the development of epistaxis.

High blood pressure, common in the elderly, can also cause intranasal bleeding.

2. Epistaxis related to a rare disease or tumor

Nosebleeds can also occur as a result of a disease such as:

In addition, both malignant (cancerous) and benign (non-cancerous) tumors of the nasal cavity often have the same symptoms, including frequent intranasal bleeding.

In summary, there are many factors that can cause epistaxis to occur. This is why it is important to quickly identify the cause of the bleeding. In the majority of cases (nearly 90%), this bleeding is not dangerous and can be controlled by simple digital compression. On the other hand, if digital compression do not work and/or if they are frequent and abundant, specific treatment will be necessary.

Many treatments, most of them old, exist to treat epistaxis. At Dianosic, we have developed a non-invasive, easy to use and painless asymmetric balloon for the patient. If you want to learn more about this “Made in France” innovation, click on the following link 👉🏼 https://bit.ly/3qyHele